Since we're trying to push the Makerspace movement in our library, I've been trying to think of crafts and challenges that we can present to students that are easily accessible and cost minimal. One project that I've been interested in doing for a long time is making an art journal out of a discarded book. And on Tuesday, we traveled to four schools to look at their makerspaces and learning commons so I guess I felt inspired to start a new project.

I chose my discarded book from our heap- I mean, our neatly organized shelf in the back room because it's blue (my favorite color) and because it was a biography of Amelia Earhart, someone who has always fascinated me.

I'm really interested in the concept of constructing by way of deconstructing. It seems anachronistic, and it makes me a little uncomfortable to think of about putting Derrida before Saussure, but that's just my inner literary theorist screaming out to me from deep inside.  .  .I try to keep her in a dark hole in the corner of my mind, but she's loud and her voice echoes.  .  .

First, I removed some chunks of the pages because as you add materials to an art journal, it tends to swell up, so you need the extra room inside the spine so it doesn't explode. 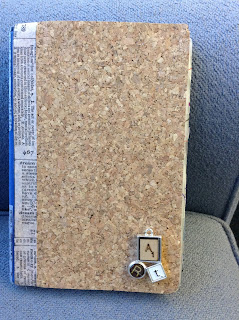 This is the outside of it so far.

A while ago, I saw a technique on Pinterest for adding texture for scrapbooking and journaling which involved paper weaving, and we had some old strips of paper left over from a Christmas craft, so I tried that. 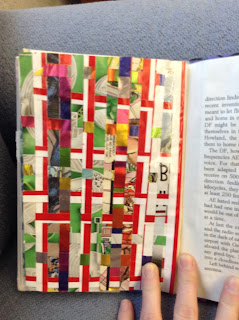 I wasn't exactly sure what I should be doing on the inside though. I'm not very good at painting or drawing, and it's difficult to write alot on pages that are already covered in text. (Of course, you can use gesso to hide the book's text, but it takes alot more time to coat each page in gesso and wait for it to dry. So I looked up some writing/drawing prompts to get some ideas. One of the first prompts I attempted was "Draw your inner critic." I've always had an image of what it would look like, so I tried to recreate it with Sharpie markers: And that led to the idea of doing a black-out poem, which is exactly what it sounds like. You take a book page, and choose which words to black out. The words that are left form a free verse poem. Another example of constructing by way of deconstructing. 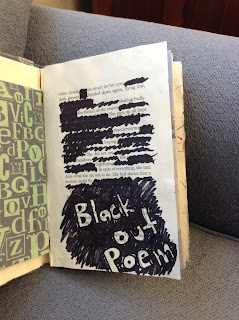 I really enjoyed doing the black-out poem, and one of the pages that I looked at next led to imagine a steampunk story. The Lockheed Electra was the type of aircraft that Earhart flew, and the name seemed perfect for a steampunk heroine:

Lock: mechanical device used to secure valued items. Can be a physical object or a metaphor.

Electra: one of the most popular characters in Greek tragedies, namesake of the Electra complex in psychology, which is the psychosexual competition she engages in with her mother in order to claim the attention of her father. That type of phallocentrism reeks of Victorian gender politics, and the Victorian era is the major inspiration for steampunk subculture.

Instead of blacking out words I didn't want, I enclosed the words I did want in bronze marker, and drew arrows to connect them and give it an industrial feel. But I used bright pink to represent the heroine, as well as the symbols for gender. And the background is a crudely drawn clock with its numbers slipping away, because the struggle of Woman is timeless. 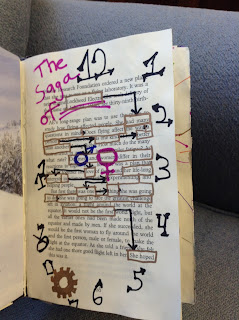 I was pretty amazed at how much I got out of that one journal page.

And last night as I was trying to figure out what to do next in my little journal, I was spotted by the baby. He wanted to color too, so I let him have a page to himself. 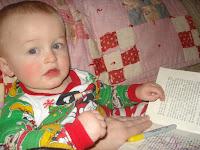 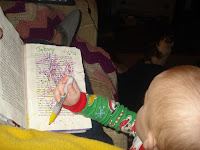 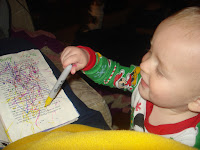 And then last night I was rummaging through my hoarders' stash- I mean my craft supplies that are neatly packaged into labeled containers, I found a few illustrated pages from an old Alice in Wonderland book that I had saved from one of the book mobiles that I made a couple years ago. 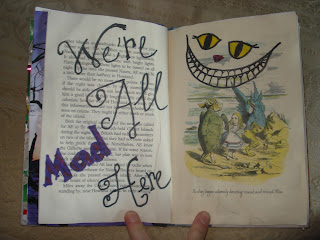 One of the prompts I liked alot was to dedicate a page to your favorite fairy tale.  I must emphasize that my drawing skills are really poor, so the original pencil sketch of the little mermaid was laughable. I laughed. My co-worker laughed when I showed her. Even a sixth grade laughed at my lack of talent. Mermaids are supposed to be breathtaking and beautiful, and mine looked like that crude imposter that Robert Ripley stitched together.

But, it looks a little more recognizable now: 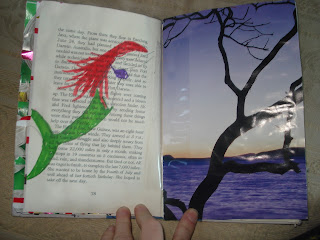 It's still a work in progress, but really, what isn't?